Chufy is a self-taught artist born in Geneva and currently working in Lyon. Passionate about architecture, he began to paint after studying graphic design. You have been able to discover it around the bend of the streets of Lyon or at exhibitions such as during the first edition of Spraying Board in March 2020 where we exhibited its 4 skateboards. Here he discusses his favorite subjects, his way of working and his future projects.

Was architecture one of the starting points for your creations? What are your favorite subjects?

Chufy: Architecture has always interested me, or rather the technical and mathematical aspect of architectural drawing. I have always been attracted by the space in which we live, the size of the elements that surround us, their volumes and the way people perceive and transcribe the surrounding space. Architectural drawing is the main inspiration of my work, perspective has always guided me, I use it as a tool to create countless possibilities while being constrained by a technical rule. It is this modular aspect which is the basis of my work, like an architect who designs a house, gradually adding new volumes, new lines interlocking one with the other until the final result.

You are inspired by Escher, Vasarely or Braque. And in urban art, what inspires you?

Escher and Vasarely have indeed always inspired me, because they saw their arts as a science based on mathematics. In urban art, several artists inspire me, in particular certain abstraction artists like SatOne, or even Erosie, who have invented their own language of shapes and colors.

You have visited several cities, which have influenced you?

In Latin America, many cities have inspired me, including Medellin in Colombia, Quito in Ecuador and many others. These are cities where the architecture appeared to me as a “chaos” of construction and in reality reflects the poverty problems of different countries. In some neighborhoods, dwellings are stacked one on top of the other, creating impromptu assemblies of shapes and volumes. Not much seems to be defined in advance, and architecture is modeled as a building “bad game” based on no rules.

What are the differences between your street works, graffiti oriented, and your paintings?

The exterior paintings are very different from my studio works on the final pictorial aspect, but the general idea remains the same. On the wall I often force myself to play with the letters of my name, which is not the case in the studio. Even if the supports differ between a painting on the outside and a work in the studio, my work keeps the idea of playing on the perception of forms and volumes.

What is the medium that would make you dream and that you have never done?

I am currently working on a few sculpture projects, or more precisely wood assembly. I try to transcribe my paintings into a three-dimensional volume. It is this sculptural side that interests me, learning to play with the true dimension of space. I am more and more interested in furniture in general and I would like to experiment in the years to come the creation of furniture (chairs, tables, furniture, etc.), it is a project that I have, but which requires other skills and know-how of outsiders.

What are your stages of creation?

I draw after having placed different vanishing points which constitute the constraint of my creation. These guide me towards a sketch at the same time dictated where the possibilities are endless. Each painting is built as it goes, like an evolving architecture, where the elements overlap with each other, thus creating new volumes, passages and openings.

Lately, we can see you in a more figurative representation of architecture, with in particular “L’entracte”, you tend towards that in the long term?

I have always made paintings which tend towards a figurative representation of things. Abstraction has taken over over the years, because I have always found it more interesting to give free rein to the spectator’s interpretation. Something that is imposed during a figurative representation of things. Indeed, I remade some paintings based on a reality, it was for me the right moment during this special period. In particular this painting “the intermission” which represents a motionless city, put on pause. Who tries to transcribe the atmosphere felt during confinement. In the long run, I don’t know, I don’t want to categorize myself in one and the same universe and tell myself to do just this or that. It is only a period of creation according to the state of mind of the moment. I see this as one branch of experimentation among many that can be explored.

What is your latest project to date? Where can we find you for the next few months?

I have just completed several collaborations with different brands. In particular Opinel for whom I created a visual for a collection of knives limited to 500 copies. In resonance with the giant Opinel that I painted the previous year in Saint-Jean-de-Maurienne, the city where this brand was born. And also with the 9th Concept for the Art Edition 2020 of the Desperados brand, which for 20 years has been collaborating with artists to design the bottle labels. An exhibition was initially planned for the end of the year at Chromatique but it will be postponed until next year in view of the current restrictions.

Many thanks to Chufy for this interview.

This website uses cookies to improve your experience while you navigate through the website. Out of these, the cookies that are categorized as necessary are stored on your browser as they are essential for the working of basic functionalities of the website. We also use third-party cookies that help us analyze and understand how you use this website. These cookies will be stored in your browser only with your consent. You also have the option to opt-out of these cookies. But opting out of some of these cookies may affect your browsing experience.
Necessary Always Enabled
Necessary cookies are absolutely essential for the website to function properly. This category only includes cookies that ensures basic functionalities and security features of the website. These cookies do not store any personal information.
Non-necessary
Any cookies that may not be particularly necessary for the website to function and is used specifically to collect user personal data via analytics, ads, other embedded contents are termed as non-necessary cookies. It is mandatory to procure user consent prior to running these cookies on your website.
SAVE & ACCEPT
Nouvelle expo avec l'artiste BABS au 120, lieu d'art éphémère 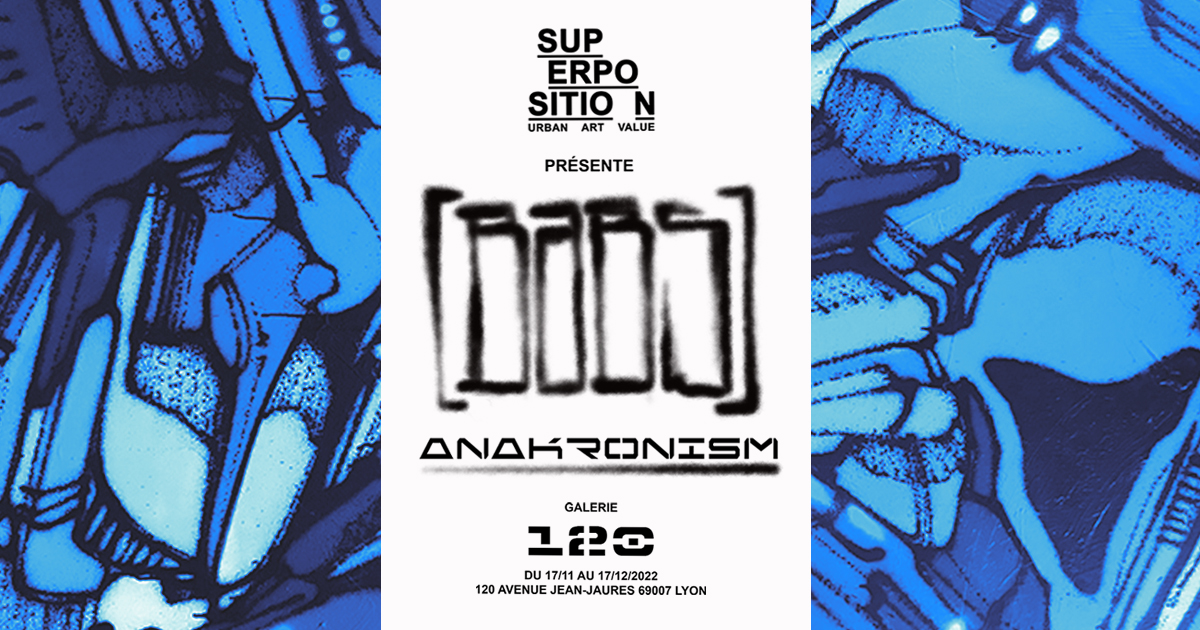