Each month Superposition celebrates a work of art so that you can discover its details, its elaboration and the artist behind it. This month we present the artist Tang through one of these works from the exhibition BRUTE .

In a reflection that began years ago, Tang introduces us to Gabbiano D’Entelli through the use of clusters and plaster. All mixed with the theme of the reappropriated object from the Superposition exhibition.

In both solo and duo creations, the artist uses the theme of the masked creature, inclined to exist in a mysterious world with its past and its future.

The theme of the masked character […] there is a lot of it in my creations and in the drawings of free imagination. And then, him [Gabbiano d’Entelli], yes, it is really a mixture of many things at the same time: mummy, Egyptian, a monk, a pilgrim, these figures which come back often in my work and for a long time.

Focus on Tang’s work: The hood

It is in an environment full of historical reference that Gabbiano d’Entelli comes to life for the BRUTE exhibition. Gabbiano, “seagull” in Italian, refers to the imagination of the bird creature with a pointed beak, which we have seen many times in his work, notably that of the Amelin series in 2020, in duet with l’artiste Etus .

The character, as mystical as he is intriguing, bases his past on the history of Venice and its island Burano, whose lacework dates back to the 16th century. During the creation of the work, the hood appears through the shaping of plaster bands, letting its raw material live. This slight ventilation through which the black mask can be seen at its base, creating a real identity for the character unknown to all, and which here comes to life.

And Gabbiano is that. Aesthetically, it’s always interesting to have this immaculate figure among rusty things, old and more. He is new, he has landed and does not know where but it is a recent creature, which has just been made … and how it can become embedded in many objects? I don’t know what face it’s going to take. I don’t know yet, it will come back.

Zoom on the work: the foam

Like the Marvelian hero who shapes our imaginations, the character stands in a movement interweaving clusters of different sizes. An arched movement, inspired by The Hokusai Wave, takes shape through its rusty central structure, mixed with other smaller and malleable pieces of wire. This is how these fine snatches of threads coming out of the wave, splash and float to create this first scene in the life of Tang’s character.

Him I wanted him to surf so from there, make a heart like that with this junk there. She was doing fine. And then add more foam with the little threads so that there is a little lightness and movement, of hokusai wave. And then, the little whirlwind fell nickel. I wanted to have junk and black and white. There, I did not want to add a green plastic thing, it was not the place for that. It had to be kept fairly simple. very white, very clean and then, something rusty as it is, as it was found walking.

Mentioned in the article – artist Etus and their series Amelin as a duo:

A big thank you to Tang for these comments and clarifications.

This website uses cookies to improve your experience while you navigate through the website. Out of these, the cookies that are categorized as necessary are stored on your browser as they are essential for the working of basic functionalities of the website. We also use third-party cookies that help us analyze and understand how you use this website. These cookies will be stored in your browser only with your consent. You also have the option to opt-out of these cookies. But opting out of some of these cookies may affect your browsing experience.
Necessary Always Enabled
Necessary cookies are absolutely essential for the website to function properly. This category only includes cookies that ensures basic functionalities and security features of the website. These cookies do not store any personal information.
Non-necessary
Any cookies that may not be particularly necessary for the website to function and is used specifically to collect user personal data via analytics, ads, other embedded contents are termed as non-necessary cookies. It is mandatory to procure user consent prior to running these cookies on your website.
SAVE & ACCEPT
L'artiste FOUAPA au 120, notre lieu d'art éphémère 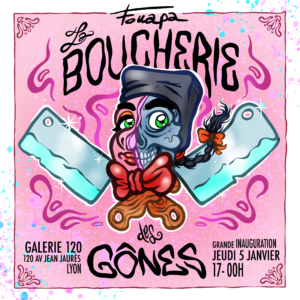